View this document on Scribd

Hylight: The Pocket Stethoscope Sterilizer was a project that came out of the Industrial Design class called Designing Healthier Hospitals taught by Chris Bull of Brown and Michael Lye of RISD. This project was chosen from 20 different concepts to be prototyped by a group of four students: Marvin Li ’13 (Brown), Alex Nam ’14 (RISD) and Regina Kang ’14 (RISD) and myself. I was the sole project member who was a part of the group who developed this concept from scratch, so it was a rewarding experience.

Problem Statement: While stethoscopes are one of the most commonly used tools by a HCW, studies have shown that they are rarely cleaned in between different patients. Without regular cleaning, stethoscopes become fomites that have the potential to contaminate multiple patients and cause costly HAIs.

Design Brief: The Stethoscope Sterilization Pod would be a tool that stores and cleans the head of the stethoscope between patients to inhibit the growth of bacteria and potential to spread HAIs. The pod contains an antibacterial mechanism and therefore would require minimal effort by the healthcare professional to maintain a sanitary tool.

We first had to decide which cleansing agent we planned on using to rid the stethoscopes of lingering germs. We had three options: alcohol spray, UV light, and thymol. After doing calculations on volume, power, and effectiveness to fit the specs above, we ruled out both thymol for its inability to kill germs in a short time frame and alcohol for the outrageous necessary volume and maintenance. UV light did have its complications as well– however we were able to find a UV-C bulb on the market that produced enough light to kill common germs that cause HAIs in as little as 4 minutes. Next issue was the battery and circuit size which would significantly increase our housing. We found that using a cell phone battery would provide enough capacity to only need to charge it every two weeks via microUSB. So UV light it was. 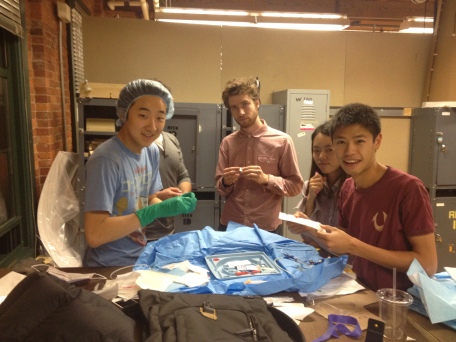 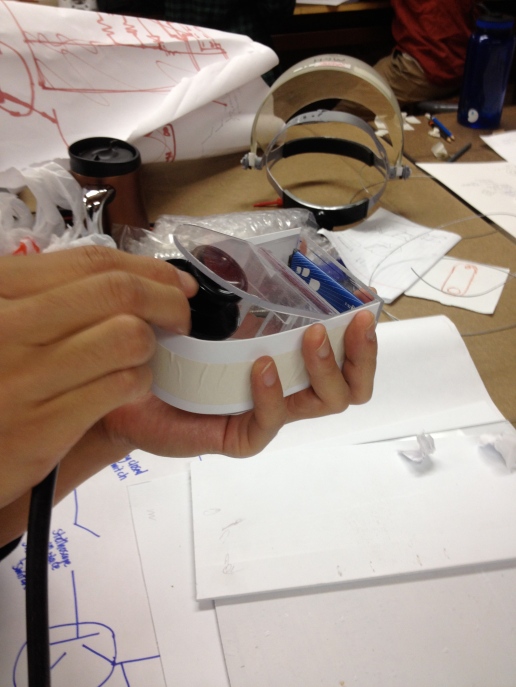 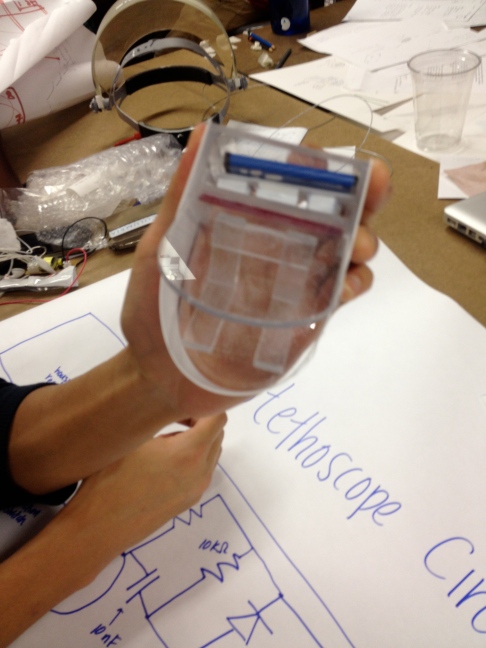 We then began doing form studies and plastic mockups to get a feel of how big was too big and how heavy was too heavy. You can see some of those exercises in the photos above. We also wanted the stethoscope and cover to be worn a number of different ways, and were even looking at rotator clips to keep it connected to a pocket while allowing it to move freely. We played with the idea of it being hands free and having a mechanism that closed itself. We also thought about sliding mechanisms. But we originally fell in love with the simple clip and decided to use that in our final design. It allowed for a tight seal for the light as well.

Eventually, we decided that combining the battery and circuit with the stethoscope clip was getting a bit cumbersome. By separating them into two halves, we could keep the technical components inside the pocket while having solely the clips with lights to surround the stethoscope. We would have two bulbs, one on each side of the housing for maximum exposure as well as a reflective inside to spread the light to all facesof the stethoscope.

As for the circuit, we needed a high power circuit for the bulbs that required 380 V at only .5 mA, a portion we received from the company who sold the bulbs. However, we needed to improve upon the circuit to allow for a number of switches and safety precautions, as well as a timer that would keep the lights on for only the needed 4-5 minutes for it to kill all of the germs. We arranged the circuit to allow for a switch that made sure that the housing was closed and the stethoscope (not a finger, or nothing) was inside before the light turned on. We used Express PCB to get printed circuit boards at small quantities, and used the rapid prototyping machine at RISD tomock up the body of the product.

If my team were to continue this project, we would work on making a totally reliable circuit, sealing the light completely from the user, connecting dangling wires into a ribbon wire or tubing, and slimming down the housing.

View this document on Scribd